Stocks hammered with Nasdaq plunging again as liquidity dries up

All major indexes were hammered today but recouped some of their losses by 1:00 p.m. Central Time.

As I type now, at 1:50 am, central stocks have reversed lower. 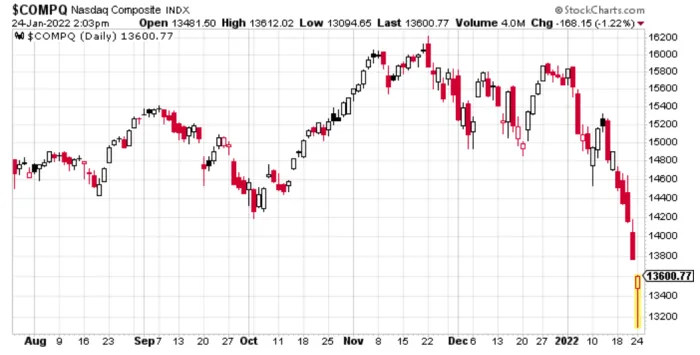 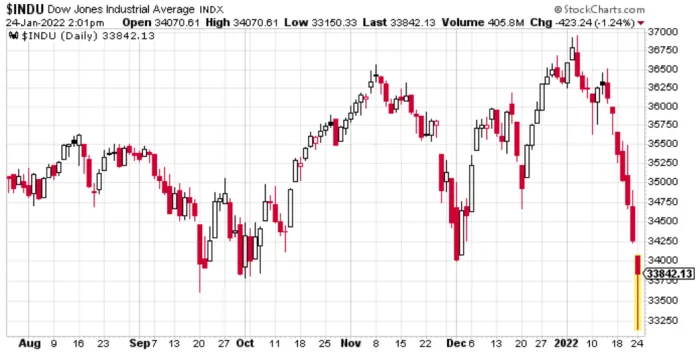 There is now a vicious short-term hedging rally underway and stocks closing green would not surprise me in the least.

Nor should anyone be surprised if stocks return to lows.

Let’s step back and look at the longer term charts and the grand scheme of things.

A weekly chart shows stocks more than doubling from the pandemic low.

It would take another 900-point plunge on the S&P 500 just to get back to the pre-pandemic peak.

Let’s take an even broader view.

Many Millennials and Zoomers have no idea what a strong bear market looks like.

I believe we are headed for cheap Fed money courtesy coupled with three rounds of fiscal stimulus, one under President Trump and two under Biden.

Yes, I’ve been a bear for a long time. But the Fed had other ideas by pumping in massive amounts of QE and keeping rates too low for too long, just as it did the dotcom bubble of 2000 followed by the housing bubble of 2007.

In every respect, this bubble is larger and more encompassing than the previous two.

A 40% decline from the highs is the bare minimum of what I expect. This is how incredibly overvalued stocks are.

If so, this fall from the January highs is barely a down payment on what’s to come.

John Hussman has a great column this month called Return-Free Risk that I encourage everyone to read.

The question is not whether one should adapt to unprecedented Fed policies, but rather what form those adaptations should take. We fully believe that these historical valuation extremes have removed decades of future investment returns and strongly suspect that the Fed has also magnified future downside risk. I believe investors have placed themselves in a position that will likely be rewarded with a very long and interesting journey to nowhere over the next 10 to 20 years. At worst, they may find out the hard way that a pullback simply to ordinary historical valuations actually involves a loss of two-thirds of the S&P 500.

The chart below shows how deranged Federal Reserve policy has become. I use that word wisely: deranged as wildly out of historical bounds, and also deranged as intellectually deficient. The most important issue facing the Fed here is not how quickly to scale back its asset purchases, or when the next rate hike should occur. The real problem for the Fed is that it has completely abandoned any semblance of a systematic policy framework, apparently preferring a purely discretionary one.

Monetary base per dollar of nominal GDP 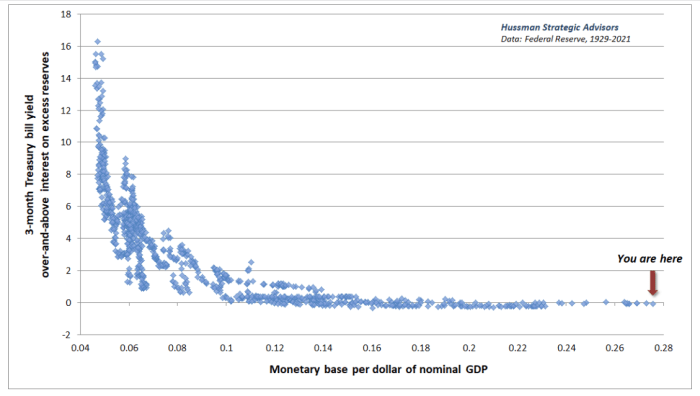 Base Money per Dollar of Nominal GDP – Chart from HussmanFunds.Com

The current level of base money relative to GDP is in stark contrast to Section 2A of the Federal Reserve Act, which directs the Fed to “maintain long-term growth in monetary and credit aggregates commensurate with long-term potential.” of the economy to increase production”. .” The ratio of base money to GDP never exceeded 16% before 2008. The closest alternative to holding zero-rate base money is to hold a Treasury bill, and 16% of GDP in hard currency zero-rate base rates are already enough to drive up treasury bill rates. to zero. Until the Federal Reserve cuts its balance sheet in half, the only way for the Fed to raise short-term interest rates above zero is to explicitly pay banks interest on their excess reserves (IOER) .

In case you missed it, also check out my January 21 article S&P 500 Futures Positioning Suggests More Downside Is Ahead.

Well, here we are.

Despite the massive sell-off, fund managers and speculators are still extremely long-term, even adding more.

Hussman is accused of being a perma-bear and so am I. What is true is that we are looking to break past the bubbles and this one has been spectacular.

Yet my scenario of a 40% decline (at least) makes me look like a rabid optimist compared to John.